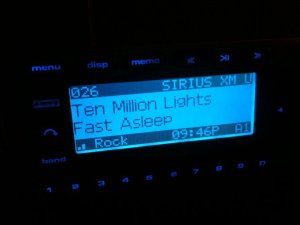 Ten Million Lights is excited that they have been receiving such great support from so many radio stations including XMU Sirius Satellite radio and Bagel Radio in San Francisco.  The record is charting #16 at both SCAD in Atlanta, GA and WDUB in Granville, OH Doobie Radio.  We’ve had a blast doing interviews at WUVT, in Blacksburg, VA and on KSCL, in Shreveport, LA.

Honestly we’re humbled by the support we’ve been receiving and are overwhelmed by the number of stations that have put us in rotation including, WCDB, WHCL, WKWA, WBJB in NY and NJ; KBEACH, KUCI and KCSS in California; and KXCI, KJACK, and Radio Pheonix in Arizona.

WVAU and WJHU in the Washington/Baltimore are have been spinning the record and tons more stations across the US like WUMD in Dartmouth, MA, KRUI, in Iowa City, IO, WMHD in Terre Haute, IN, WSCA in Portsmouth, NH, Radio UTD in Richardson, TX, WASU in Boone, NC, WUMD, in Dearborn MI, and WAWL in Chatanooga TN.

Big thanks to Canadian stations who have also been playing our songs like CJLO in Montreal, CJUM in Winnipeg and CHMR in St. Johns, Newfoundland.